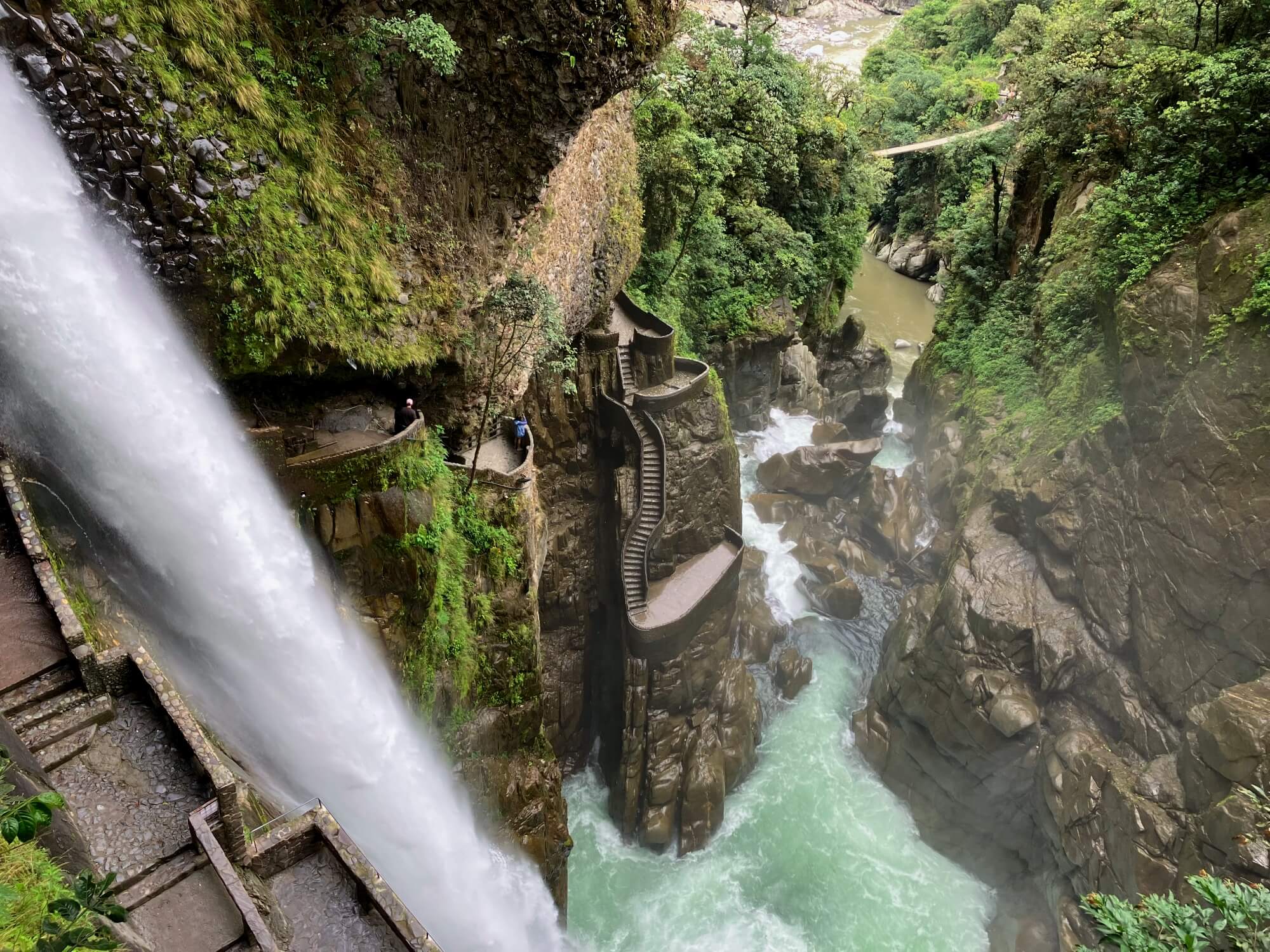 El Pailón del Diablo Waterfall is a magnificent sight situated on the edge of the Amazon rainforest in the misty mountain landscape. It is an awe-inspiring, 80-meter-tall waterfall that produces huge whorls of clouds, illustrating the unrefined grandeur of Ecuador. It is widely recognized as the country’s most giant single-drop cascade.

“It is widely recognized as the country’s most giant single-drop cascade. “

Additionally, there is much more to do other than view the waterfall! Take on the thrilling inclined suspension bridges, go on a picturesque riverside walk, discover the captivating wildlife and vegetation, and enjoy the balconies with panoramic views.

The entrance to the El Pailón Waterfall is roughly 20 minutes from Baños, in Rio Verde. The small town of Rio Verde is situated magnificently on a terrace in-between two tunnels of the Baños to Puyo road.

Entrance through the lower part of the Pailón del Diablo Waterfall

The oldest entrance is now known as Grieta al Cielo and is found past the bridge across the Verde River, which makes up the waterfall. To get there, you must park your car or bike in the lot and take a path to the control point, which is quite close to the waterfall.

This path to the entrance is 2.8 kilometers round trip (steep down/uphill). Once there, you can walk across the hanging bridge to see the Pailón del Diablo waterfall from the bottom. You can walk up into the gorge and observe the waterfall from balconies getting wet, so it’s best to bring a rain poncho.

The Isla del Pailón gateway to the Waterfall was recently constructed to handle the high daily visitor rate.  The entrance includes a spacious parking lot and the option to purchase food. The 700-meter round-trip path to the waterfall provides a fascinating experience, as you can witness the erosion of the volcanic rock caused by the Verde River. If you look closely, you can also find wild orchids in their natural habitat. At the trail’s end, you will come across two suspension bridges that plunge to the Pailón del Diablo Waterfall, giving a fantastic view of the fall and the gorge.

In the center of Baños is a bus station where you can take a regular bus service to Puyo. The bus departs every fifteen to thirty minutes, and a single fare will cost you just one dollar. It’s normal for visitors to get dropped off at ‘Pailón del Diablo,’ so just let the driver know where you want to go. When you’re ready to head back to Baños, wait alongside the road and catch the bus from Puyo.

Accessing the waterfall requires an entrance fee of USD 2.— (2023) in both Great al Cielo and Isla del Pailón.

A trip to the Pailón del Diablo is suggested for both children and seniors as long as they have someone to accompany them and wear suitable footwear, as the terrain can be slippery. The Grieta al Cielo is more challenging than the Isla del Pailón.

How to Travel in the Desert How to Travel in the Desert

What is the Cheapest Day to Book a Flight

Get the Best Roomservice Dinner Ever

Dishes We’d Travel Back in Time to Eat Again